↓
My name is Sherie Irwin and my prefix is GOLDENOSPREY EST 2001. I first became interested in Golden Retrievers over 20 years ago, when I was living in Adelaide. I was wanting a Golden for a pet only and one with colour. I was on a waiting list for 1 year. A litter was born and there were two girls, both very cream. At that stage I was over the moon to finally have one. I didn’t want cream and wasn’t going to show. I got a show quality puppy and when I first saw her colour it wasn’t a factor. I am a member of the New South Golden Retriever Club, Royal New South Wales Canine Association and The Untied Kingdom Golden Retriever Club. When I was living in Adelaide I was a member of The South Australian Golden Retriever Committee for 4 years.
Photo taken 2001 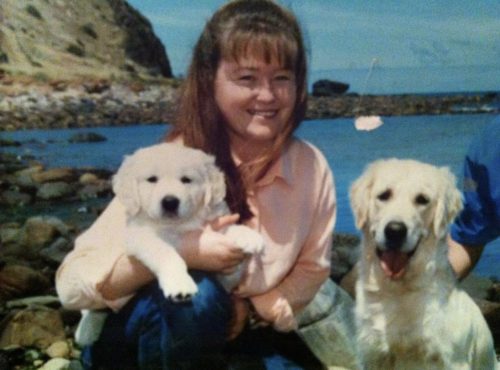 I took Mollie to her first show, which was a Golden Retriever Open Show. People kept saying to me she would make a good show dog. She did very well taking out Minor Puppy In the Golden Retriever Open Show that day in Adelaide, I was hooked. From then on Mollie did very well in the ring. She has a number of Best in Group wins and has been placed at Royal Shows and Breed Specialty shows. Mollie also had two litters and I kept a boy from each litter. Winston was pick dog from the first litter and has done well in the ring, but has not been to a great deal of shows lately. The sire of Winston is Ch. Tahmero Lottys Sundancer which is also from Buffalo Kennels. Both times I was after a bitch, but kept pick. Mollie gained her show title of Champion and now enjoys retirement. She lounges around watching TV and has taken the role of nanny for my two sons.
Photo taken 2010 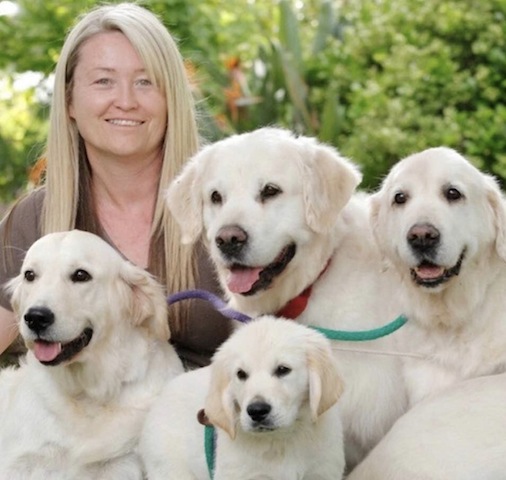 My husband and I moved to Wagga in 2005 and I bought a female Golden Retriever from Sandra and Mike Patterson of Buffalo Kennels. Maggie has English and Swedish lines. She has performed well to the few shows she has been to. I have just started doing obedience with Maggie and she displays excellent qualities in obedience. We have not shown for over a year due to us having two baby boys that have taken up all of our time. Our two boys are Thomas and Patrick.
We were entrusted with Elsie from Liz Molnar, from Dobro Golden Retrievers in 2012. In 2020 we were fortunate to be entrusted with another puppy from Liz Molnar, Dobro, “Lottie” Dobro Carlotta at Goldenosprey (AI). Lottie has an amazing temperament and has pleasing results from showing in a short time. We again thank Liz for her time and trust with her lines. Our dogs are first and for most our pets and if time permits our dogs are shown. 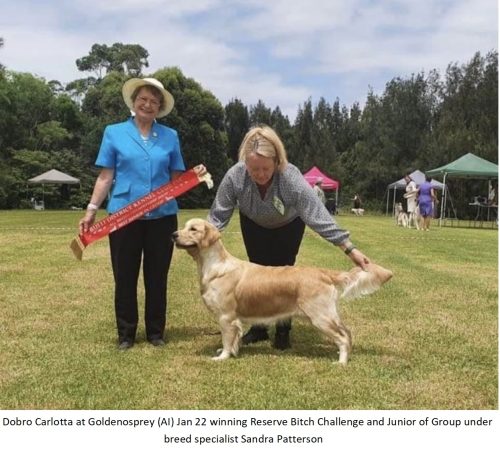